Get ready to lace up your hiking boots. From easy lakeside cruisers to challenging treks in rugged terrain, these nine unforgettable hikes will have you longing to hit the trail. 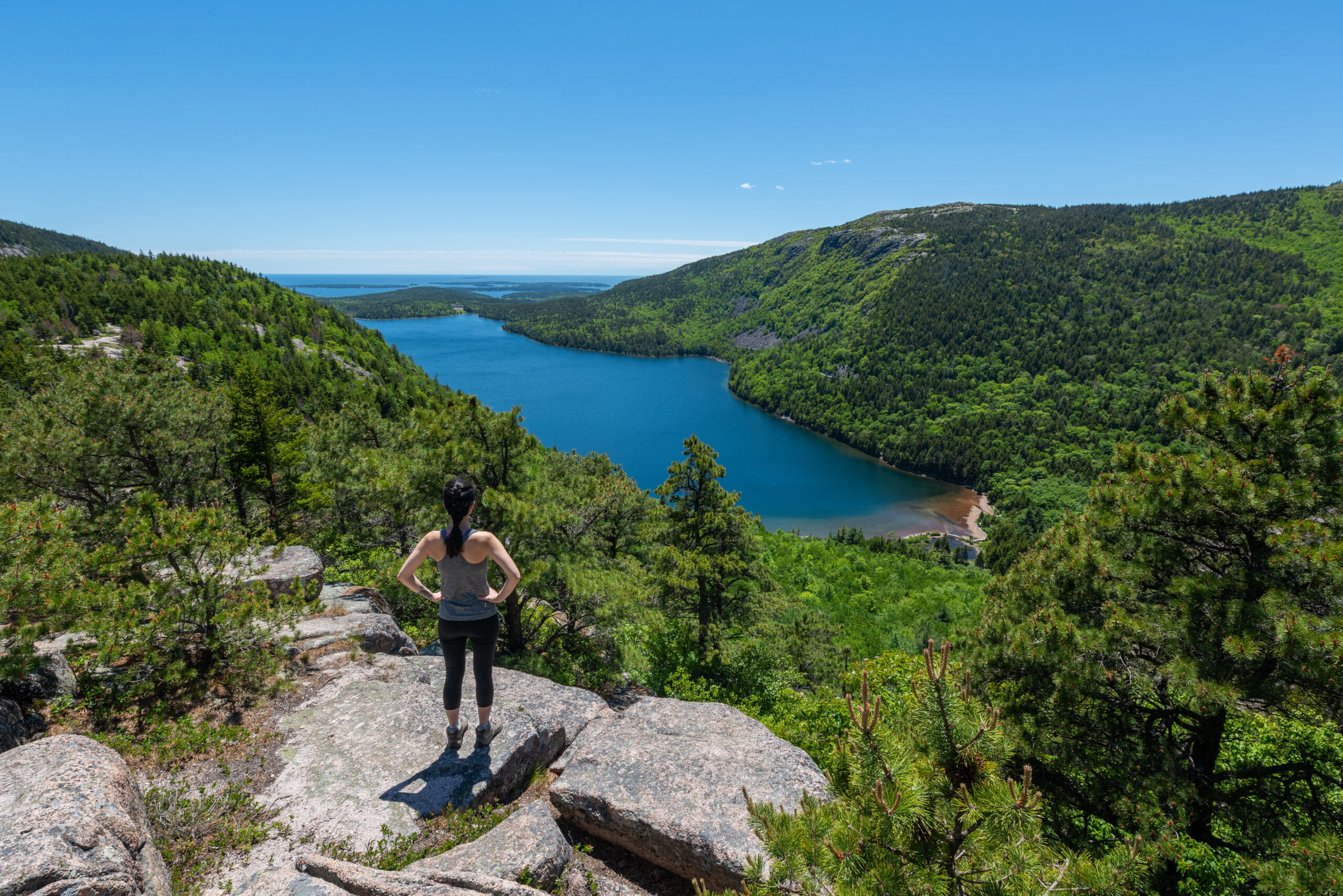 What are the best hiking trails in U.S. National Parks? Everyone has different reasons for loving their favorites: Beautiful views, ease of access, distinct ecosystems, or even dropping off the grid for a while.

We’ve chosen nine of the best park hikes to add to your list, from easy lakeside walks to more-strenuous treks through rugged terrain. And all but one can be done as a day hike (or less). We’ve also ranked their difficulty level. Easy hikes have mostly flat, unvaried terrain. Moderate hikes are more varied, with some elevation gain. Strenuous hikes mix varied terrain with serious elevation, for the kind of trail where you might want to bring your own hiking poles.

Ready to lace up your hiking boots and hit a trail near you? Be sure to check every park’s reopening status before you go. 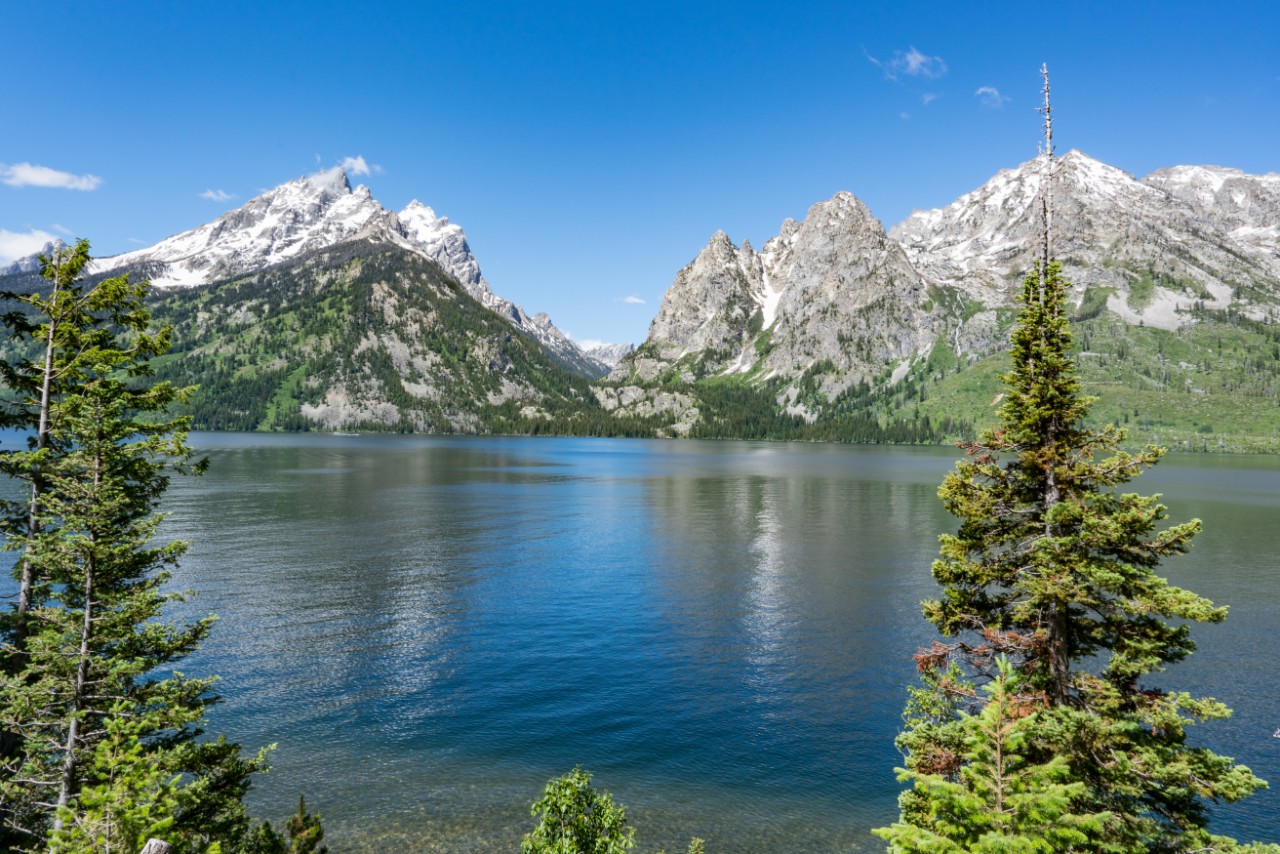 Jenny Lake, the second-largest lake in Grand Teton National Park after Jackson Lake, is easily the park favorite. The namesake loop trail that wraps around it gives hikers beautiful views of the Tetons without the demanding climbs of backcountry trails. Start from the trailhead and hike along the eastern shore of the glacier-carved lake, first. The trail stays relatively close to the shoreline and has numerous vantage points with views of Teewinot Mountain, Mount Owen, Cascade Canyon, and Storm Point. Cross the footbridge at the String Lake Outlet to continue on the western side, where you’ll get spectacular views of the Gros Ventre Mountains.

Don’t be put off by the length of the trail. It’s primarily flat with only slight elevation changes as it tours Congaree National Park’s namesake river through dense vegetation, bottomland and bald cypress forest. From the Harry Hampton Visitor Center, follow the signs for the River Trail to reach the Congaree River, a curling ribbon of water that forms the park’s southern border. The lifeblood of the park’s incredible biodiversity, it occasionally overflows its banks and pulses water through the surrounding hardwood forest, among the last remaining old-growth in the United States. The region’s wilderness provides cover for bobcats, deer, wild pigs, coyotes, armadillos, turkeys, and otters, while the river hosts turtles, snakes, alligators, and fish.

Tucked into verdant rain forest on Hawaii’s Big Island, this 500-year-old lava tube on Kīlauea Crater once had a river of 2,000-degree Fahrenheit lava flowing through it. Today, the only things flowing through are hikers interested in seeing the amazing cave at end of the short trail that heads off from.Kīlauea Iki Overlook The 600-foot-long cave is a terrific introduction to lava tube geology: Solidified drips and waves of once-liquid lava rock clearly show the molten forces that created it. Fascinating ecosystems also live inside its fragile environment (no touching, please). Due to limited parking and cave popularity, time your hike before 9am or after 4pm to avoid the crowds. 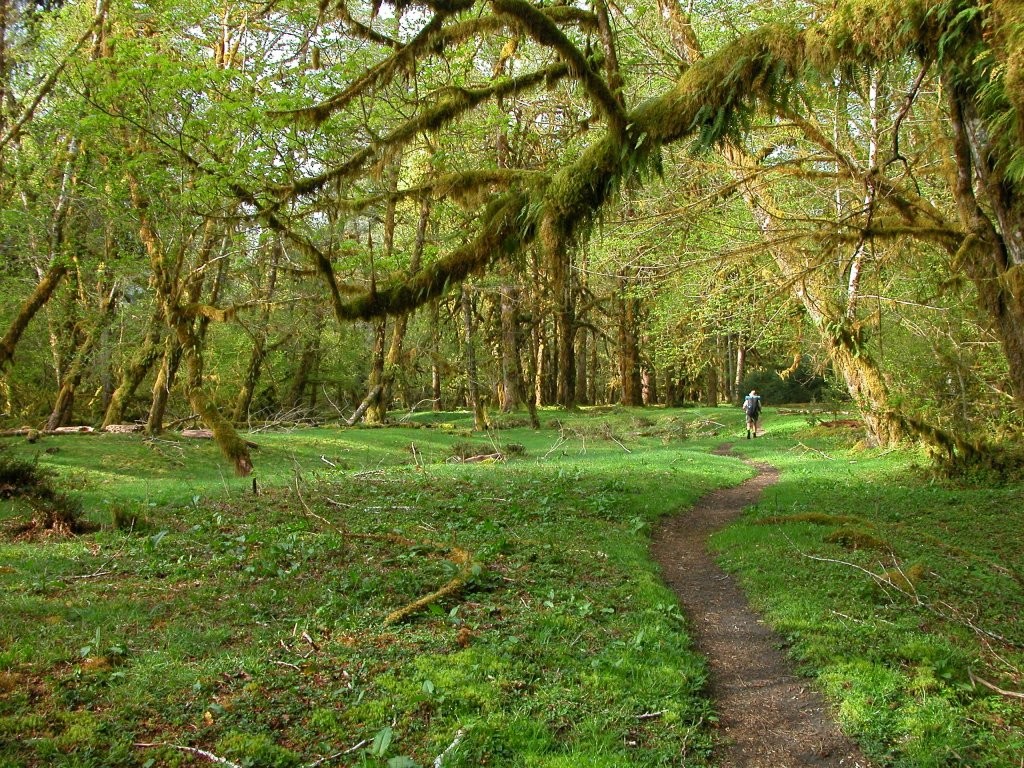 While the Hoh River Trail runs 17.4 miles from the trailhead at the Hoh Rain Forest Visitor Center to Glacier Meadows, the shorter segment to Cougar Creek is ideal for plunging into the deep, mossy core of the Hoh Rain Forest, one of the finest temperate rainforests in the United States. The mostly level trail wends beneath a wide canopy of massive old-growth trees, including bigleaf maple and Sitka spruce. Aside from the sound of the river, a hush prevails. At approximately 3.2 miles in, you’ll pass One Square Inch of Silence—considered by preservationists to be the quietest place in the country

Kings Canyon National Park’s Redwood Canyon contains not only the world’s largest intact sequoia groves, but also the world’s largest area of old-growth sequoia trees. The lonely 1.5-mile dirt road that leads into the Redwood Canyon trailhead often deters visitors, so you may have these stupendous trees all to yourself—including the world’s tallest sequoia, a 311-foot high specimen that’s also found here. Sometimes referred to as the “grove within a grove,” the Sugar Bowl Loop departs from the Redwood Canyon trailhead and showcases a high density of young sequoias as well as a stand of mature trees. As the trail leads along the ridge of Redwood Mountain, it also offers a prime overlook of Big Baldy Ridge, one of the best parts of the hike.

This hiking trail in Acadia National Park winds through thick spruce forest before giving way to granite ridgelines and, ultimately, summiting two of the park’s highest peaks. Start at the Jordan Pond House for the hike to the 1,194-foot summit of Penobscot Mountain, which has some of the finest views in the park, including Mount Desert Island and its surrounding bodies of water. A descent into the forest valley turns uphill again for the climb to Sargent Mountain’s 1,373-foot summit, with views of Somes Sound, Cadillac Mountain, and Cranberry Islands. Strategically placed iron rungs and ladders are helpful, but the hike’s still far from easy. This is a perfect trail to hit in the fall, when peak foliage suffuses Acadia in kaleidoscopic colors.

Starting from the valley floor at the Exit Glacier Area, this strenuous trail leads through cottonwood and alder forests and climbs above the tree line for a spectacular view of the 700-square-mile Harding Icefield. The largest icefield contained entirely within the United States, Harding’s horizon of snow and ice extends as far as the eye can see. Over the course of the steep, steady ascent, you’ll climb nearly 1,000 feet of elevation with every mile. Be bear-aware along the way—black bears are spotted almost every day from this trail.

Get better acquainted with the flora and fauna in the heart of Southwest Texas’s Chisos Mountains on this Big Bend trail that owes its name to a local legend that purports a secret mine once existed here. The trail starts at mile 5.1 on Basin Road and climbs past alligator junipers and piñon pines before reaching a saddle, about a mile in, with spectacular Casa Grande and Juniper Canyon views. The trail then levels out at a ridge where the landscape opens up to reveal Pine Canyon and the northern fingers of Mexico’s craggy Sierra del Carmen mountain range. It can get blisteringly hot in summer here. Visit in November or March for cooler temperatures; the park will still feel blissfully uncrowded, even then.

The longest hike in Bryce Canyon National Park—and on this list—the Under the Rim Trail descends into the canyons below the Paunsaugunt Plateau that rims the hoodoo-filled amphitheater for which this Utah park is known. Completing the entire trail (it’s 46 miles round-trip) necessitates at least one night of camping (permits required). Even if you’re fit enough to complete the hike in one day, you’ll want to stop to appreciate the close-up views of the park’s otherworldly hoodoo rock spires along the way—especially at Hat Shop, where the rock formations are topped in white. Don’t want to do the whole thing? Shorter segments are easily accessible from the highway between Rainbow Point and Bryce Point, the trail’s two end points.