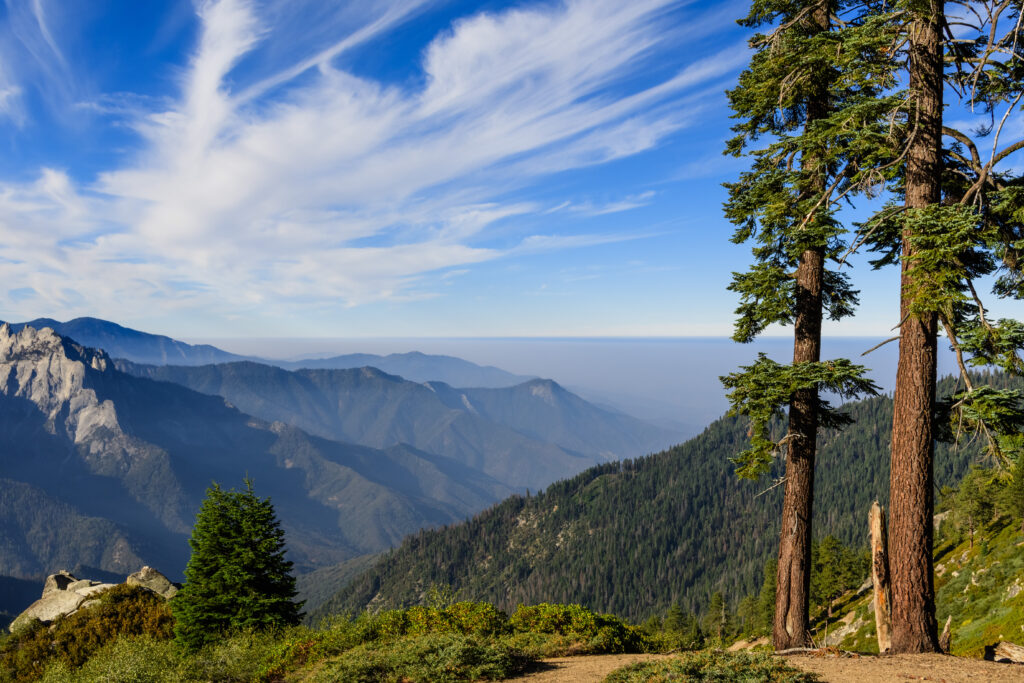 While America’s 62 National Parks abound with animals, vistas, and memorable experiences all year long, some parks only truly come into their own in the summer months. With snow melted away, hiking trails open up, roads are cleared, and bears emerge to fatten up for their next long denning down. Not sure which one to visit? We’ve hand-picked eight incredible parks with a mix of unforgettable scenery, wilderness camping, hiking trails, and seasonal outdoor activities from boating to stargazing. Be sure to check every park’s post COVID reopening status before you go. 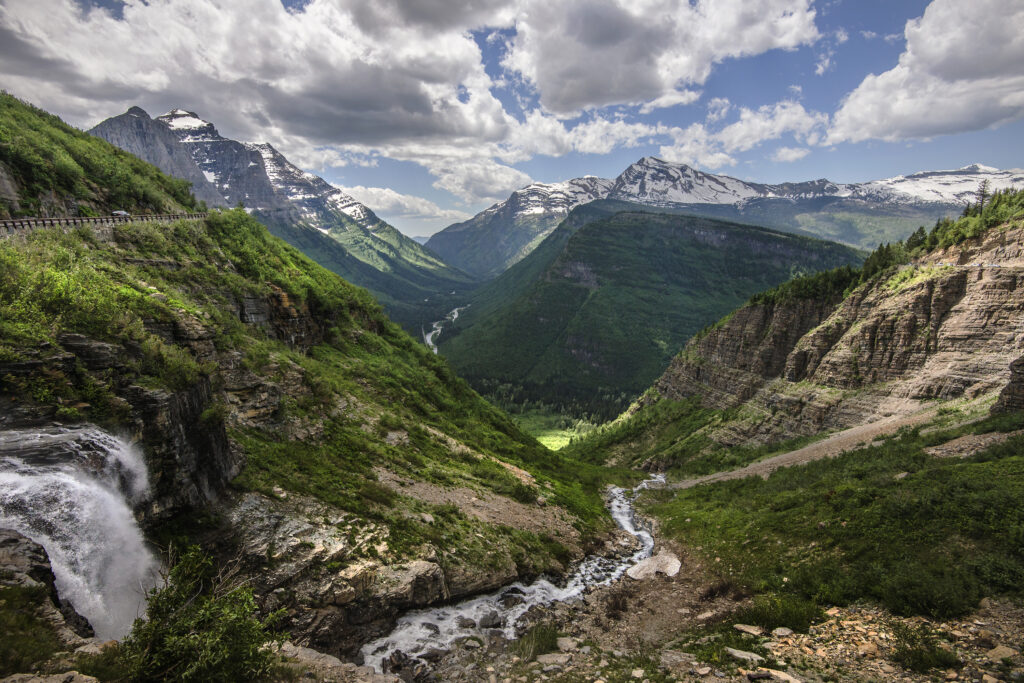 Any first visit to Glacier National Park should prioritize driving the legendary 50-mile-long Going-to-the-Sun Road. The only time you can drive it end-to-end, and experience Logan Pass, which sits at 6,646 feet, is after the snow has been cleared. Some years, that doesn’t happen until July. The drive serves up a stunning mix of mountains, wildlife (hello, bighorn sheep!), and history. The park’s audio tour also makes for excellent company.

DON’T MISS: Hikers, bring your boots for the more than 700 miles of trails. If you’re just going to spend a day or two in the park, start driving the Going-to-the-Sun Road from the eastern entrance of the park near the St. Mary Visitor’s Center to get a day hike in at Siyeh Bend. Take the rest of the day to explore sites along the road which include Oberlin Bend, a popular sight for mountain goats, and the engineering wonder of West Tunnel, created by boring through 196 feet of mountain. 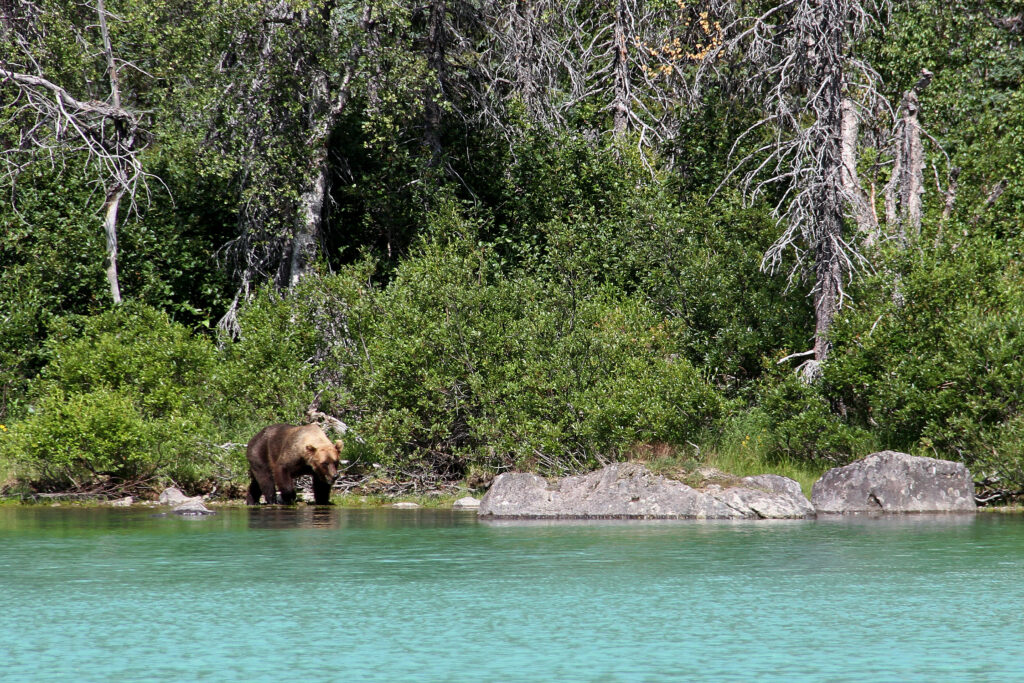 There are no roads into Lake Clark National Park. If you want to experience the 4-million-acre park and preserve in southwest Alaska, you’ll need to fly in by float plane or helicopter. Located about 120 miles southwest of Anchorage, the expansive ancestral home of the Dena’ina people would take lifetimes to explore. But if you want to see bears, summer is the time to go.

DON’T MISS: PBS fans are surely familiar with one of the park area’s famous former resident, Dick Proenneke, who filmed the process of hand-building his cabin on Upper Twin Lake. The documentary made from those films, Alone in the Wilderness, is a public media mainstay. Today, you can visit the cabin (and, when it’s not closed because of COVID-19, even tour inside). For bears, head to Chinitna Bay, where a viewing area looks onto a meadow where bears graze in early summer. While day trips here are possible, it’s truly best to make a few days of it. Rent one of two historic public use cabins on Lake Clark itself, some of Alaska’s most budget-friendly lakefront property. The Priest Rock cabin looks out on a beaver slough that is an incredible song-filled treat for bird lovers. 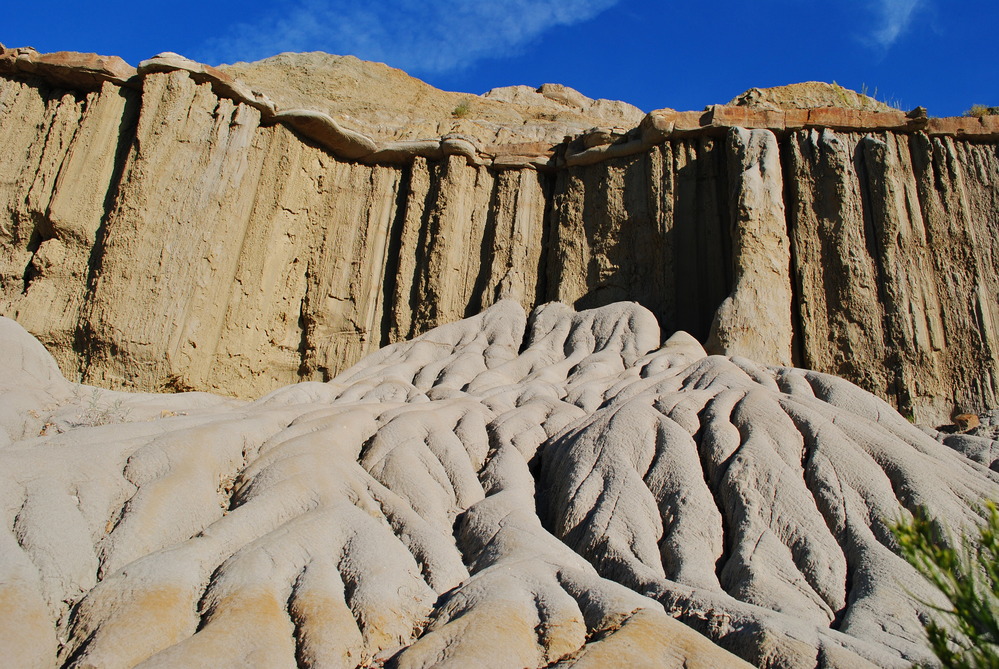 Thanks to kinder temperatures and far easier access to wildlife viewing, summer is truly the go-to season for Theodore Roosevelt National Park. The 26th president first fell in love with the area’s badlands, hoodoos, and wildlife while hunting here in 1883. The park has three areas: North Unit, South Unit, and the remote Elkhorn Ranch, where Roosevelt spent time after his wife died. If you go up that way, be prepared: The unpaved road favors four-wheel drive vehicles and there’s no cell phone service in the area.

DON’T MISS: The South Unit’s Cottonwood Campground provides a backdrop of mountains that look like they’ve been painted with stripes of reds, deep browns, and grays. It’s a peaceful place to spend a few days; you may also get a visit from the park’s resident bison. Make sure to drive the 36-mile Scenic Loop that passes badlands and accesses plenty of trailheads and visit the North Unit’s area nicknamed the “Grand Canyon of the Little Missouri.” Here, a 28-mile roundtrip drive through the canyon is ridged with badlands, their colors ranging from brilliant reds to deep coal black. Several overlooks provide a perfect place to pull out your camera but, if you just stop at one, make it River Bend Overlook. 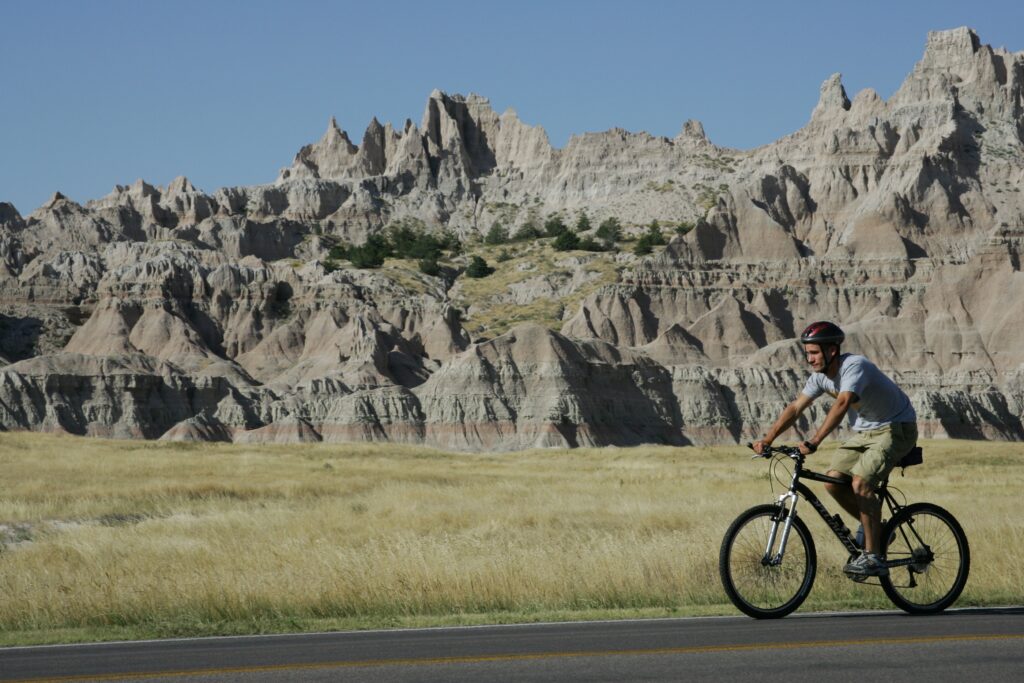 The summer months are hot in South Dakota’s Badlands National Park, a 64,144-acre preserve of otherworldly rock formations shaped as though struck by wind and water, almost carved as a sculptor does to clay. Somehow the heat makes the dramatic landscapes seem even more vibrant. So much wildlife roams here: You’ll hear prairie dogs yelling out to each other and see bison running. With plenty of summer daylight, you’ll also get to hike more and tucker yourself out to watch sundown do bring out more pinks and bright reds to the already magnificent landscape.

DON’T MISS: Consider Badlands Loop Road your park immersion. Don’t just drive on through: Stop, look, and give wildlife the distance they need. The park offers a full range of hiking trails from kid-friendly to bring-your-backpack. Traveling with wee ones or not, walk the fully accessible quarter-mile-long Fossil Exhibit Trail to see some of the creatures that used to live in the area. As for those sunsets? Head straight to Pinnacles Overlook to see the landscape explode in color. The area’s dark skies also make for breathtaking stargazing. 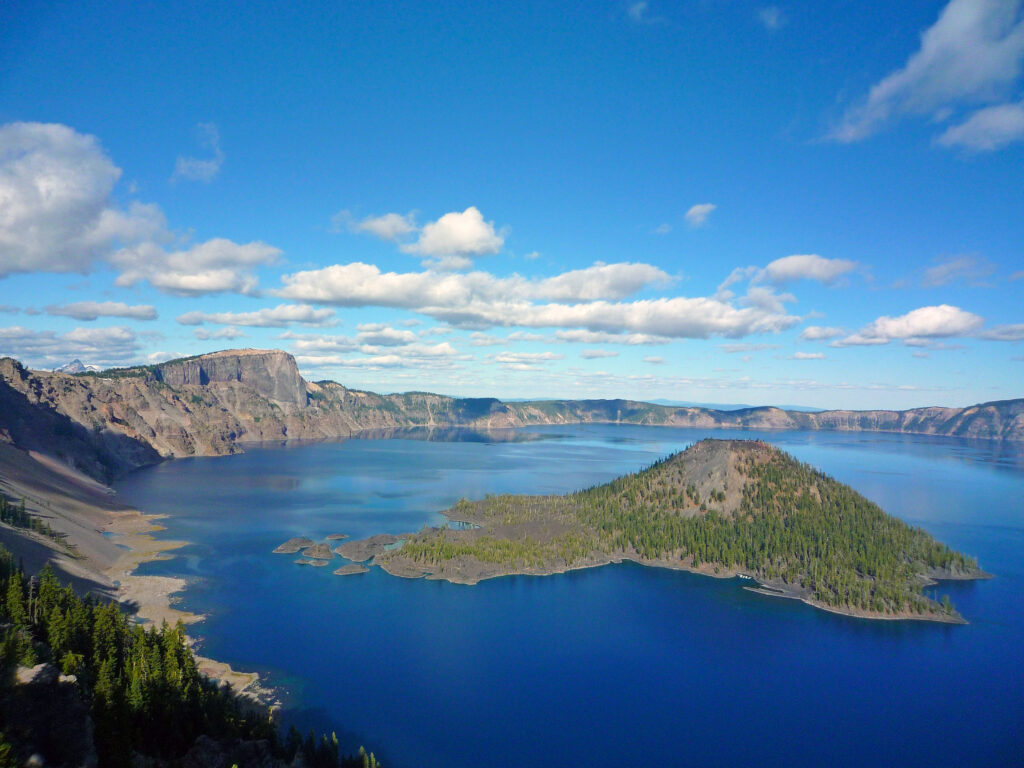 Centered around America’s deepest lake (which is inside the caldera of a volcano!), Oregon’s Crater Lake National Park welcomes those who prefer exploring by foot or bicycle, as well as by captained boat or self-driven car. Those experiences are infinitely more doable when the snow has receded: You can’t even do the full 33-mile Scenic Rim Drive for a good part of the year.

DON’T MISS: Take a ranger-led boat ride to learn how the 1,943-foot-deep lake started to form, 77,000 years ago. If your legs are strong and you love a good hill climb, grab your bike and head to Crater Lake. The Rim Drive, or in this case, ride is waiting for you. This is not a ride for casual bikers: The road is narrow and winding and there isn’t always a shoulder to ride on. Spend the night at Crater Lake Lodge, a magnificent stone building that dates to 1915, or overnight at one of two in-park campgrounds or the backcountry. 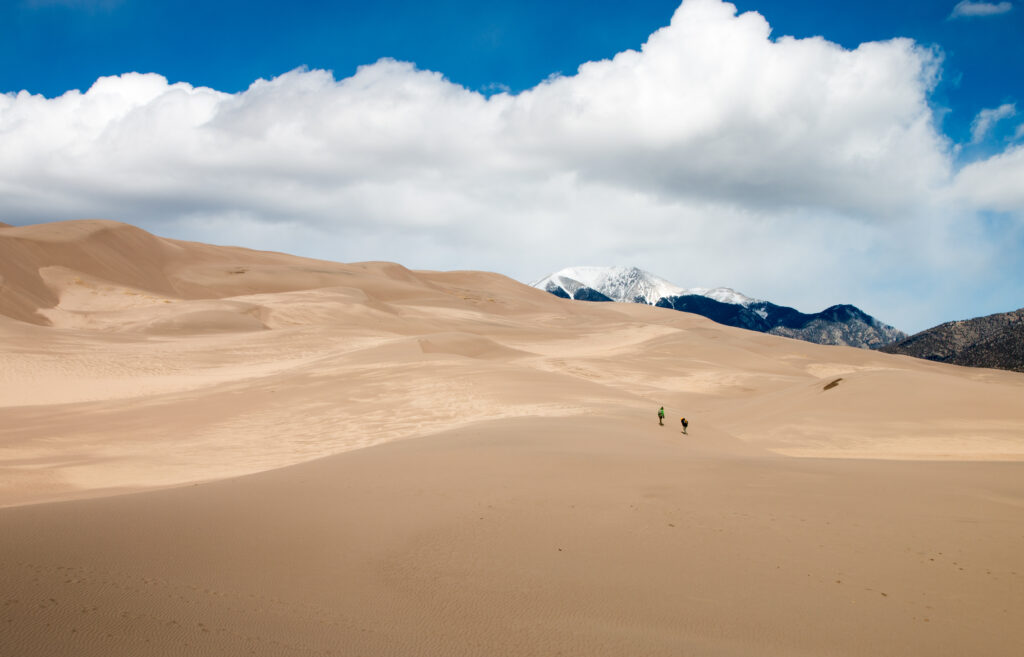 Though named for its most notable feature, a 30-square-mile dunefield, Colorado’s Great Sand Dunes National Park‘s charms go far beyond its sand. There’s also water to cool off in, hiking along Alpine trails, and grasslands that serve as buffets for elegant creatures like elk and pronghorn. The sand itself includes the tallest dunes in North America: consider it both a sight to see and the best playground you’ll ever encounter.

DON’T MISS: Sledding or sand-boarding down the dunes here will give you stories to tell for years to come. You’ll need boards and sleds made specifically to slide on sand; the closest place to rent equipment is Oasis Store, four miles outside the park entrance. Come nightfall, the area’s dark skies offer top-notch star gazing. To make the most of a summer visit, go during a full moon and take a moonlit hike along the dunes. 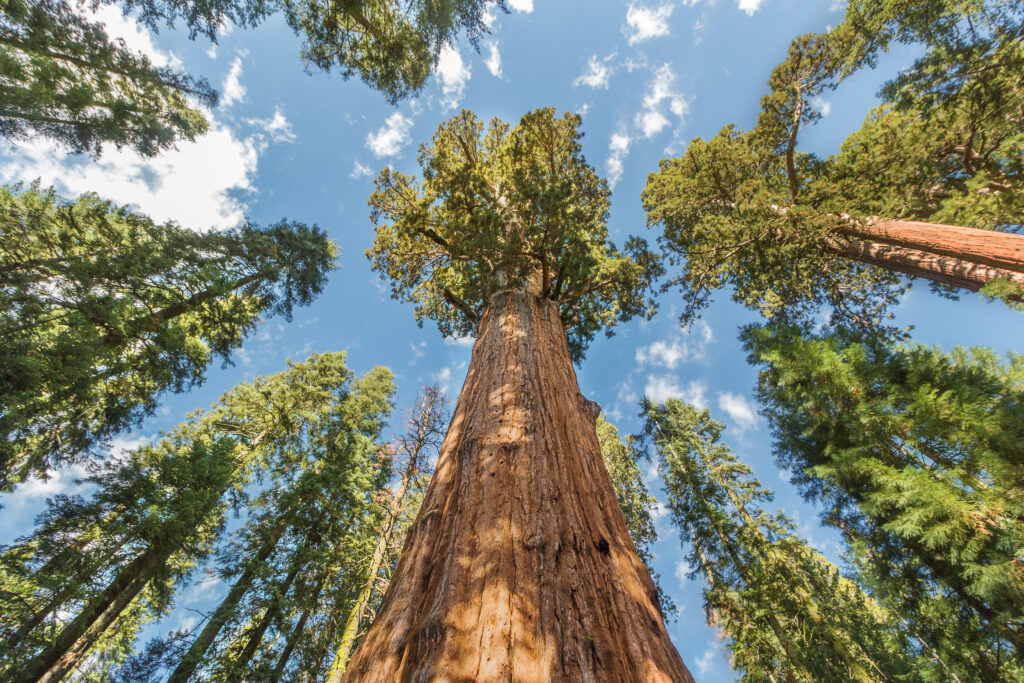 Named for the magnificent trees that seem rooted in history as much as they’re rooted in the earth, Central California’s Sequoia National Park will upend how you think about scale. And that’s true whether you decide to hike your way through one of the park’s 40 different sequoia groves or drive along scenic roads. Winter snowfall often socks in large swaths of the park, which makes summer the best time to go. Even on the hottest days, when people head here to cool off in towering groves, you’ll never feel crowded.

DON’T MISS: If you have time for just one scenic drive, point your car toward the 32.5 mile Generals Highway, which runs through the park, connecting State Routes 180 and 198. Along the way, you’ll get to see Native American pictographs, stand on the wide granite swatch of Beetle Rock and take in the view all around, visit plenty of sequoias—also known as redwood trees—and stop at an overlook with views of the world’s largest sequoia grove. Keep a lookout for Mount Whitney which, at 14,505 feet, is the highest peak in the Lower 48, and don’t miss the world’s biggest tree: The 275-foot-tall General Sherman Tree, with its commanding 25-foot diameter. Congress Trail, an easy, mile-long loop, starts next to it and weaves through lovely groves. 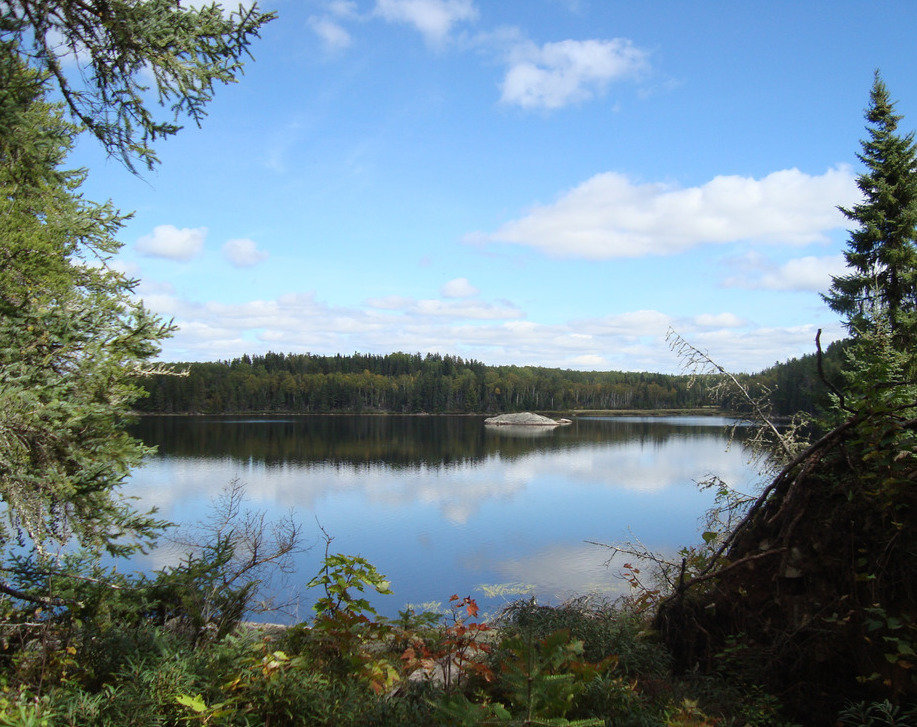 With its 30 lakes and 900 islands, Minnesota’s Voyageurs National Park is a natural water playground all summer long, with experiences that will delight kayakers, paddlers, fishermen, and birdwatchers. The park’s interconnected waterways meander past everything from northern hardwood to southern boreal forests. Birdwatchers will also delight: About 240 species have been identified here, with a range of birdwatching experiences. Arcing over it all at night? Seriously dark skies filled with millions of stars.

DON’T MISS: Rent a boat or hire a guide through a local company to lead you on a paddle geared to your experience and interests. Prefer less paddling and more cruising (with some serious lounging thrown in)? Rent a houseboat through Voyagaire, Ebel’s, and Rainy Lake Houseboats to explore one of the park’s lakes. Should you decide to forgo a boat altogether, walk the Rainy Lake Recreation Trail, a 1.75-mile ADA-accessible trail that passes by forests and lakes, with plenty of places to stop and spot a moose or white-tailed deer and listen for the common loon’s haunting call.